Zara Noor Abbas has raised a big concern by questioning why only women are encouraged to take time from work when their coworkers learn they are expecting, whereas fathers-to-be are treated differently.

Her questions, unsurprisingly, sparked an impromptu but much-needed conversation. Zara held a quick Q&A session with her fans on Instagram, in which she expressed her anxiety.

“Quick question! Why are working women asked to take steps back when they announce a pregnancy in the corporate/work world and why are men never questioned for their credibility or their enthusiasm about work when they plan a family?”, the 30-year-old questioned.

Paternity leave for fathers was mentioned. The Senate has already enacted a bill allowing employees to take paternity leave, and Abbas is right that men should make use of it. 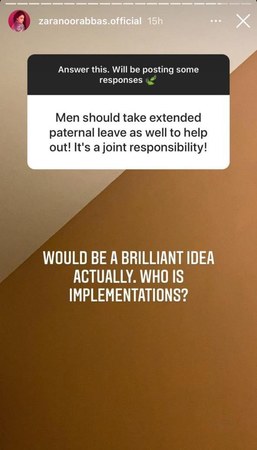 The varied range of responses she received represented where we as a society stand in Pakistan.

The majority were divided over the patriarchal society’s double standards, while others defended the old school belied system, claiming that women require complete relaxation and thus should not work at all. 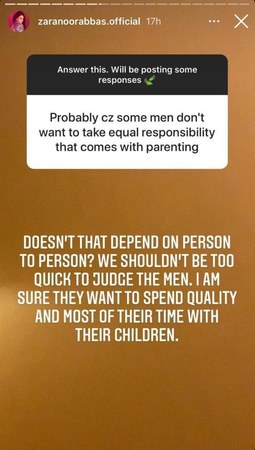 Because parenthood is a “joint responsibility,” a user remarked that males should be permitted an extended paternity leave “to help out.” “Probably because some men don’t want to take equal responsibility that comes with parenting,” another user said why males aren’t subjected to the same cultural demands as women.